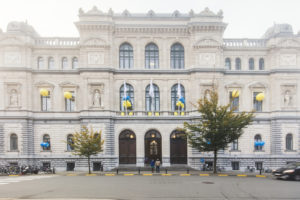 The conference will be held in the Jozef Plateau Conference Room of the Plateau-Rozier building (Campus Book Tower, Ghent University). The venue is located in the city centre, within walking distance of public transportation (Jozef Plateaustraat 22, 9000 Ghent).

Enter the building through the main entrance, go left in front of the central staircase on the ground floor, the room is at the end of the hallway. The building is accessible for people with disabilities (treshold ramps).

By train – Brussels Airport-Zaventem station is located on level -1 of the terminal, at a small distance from the arrivals hall (2nd floor) and the departures hall (3rd floor). The travel time for direct trains to Ghent is 54 min.

By bus – Nine times a day a shuttle bus travels between Charleroi Airport and Bruges via Ghent. The bus service is offered by Flibco.com. The bus stops at the back side of the Gent-Sint-Pieters railway station. The bus ride takes about 90 min.

By train -With a combined ticket, you can take a bus transfer outside the terminal to the railway station Charleroi-South in 20 min. From there, a train ride to Ghent takes approximately 90 min.

From the main station Gent-Sint-Pieters

The most important highways to Ghent are the E17 and the E40, which intersect near the city.

Please note that Ghent is a frontrunner in promoting urban sustainable mobility and as such actively discourages the use of cars in the city center. There is a large underground parking lot called “Sint-Pietersplein (P10)” close to the venue. This is easily accessible from the highway and costs around EUR 25,00 / day.

The city of Ghent:
https://visit.gent.be/en/home